My Story - Training to become a Driving Instructor

Wow! This is going to be another boring blog, it's how I trained to become a driving instructor in Sheffield!

So long ago now.  Can I even remember?   Prior to 2007, I worked as a Civil Servant in the Department of Trade and Industry (DTI).  Great job, great people but absolutely no job satisfaction.  I had various jobs in my 14 years as a Civil Servant, my favourite was training staff.  My last position was within an agency of the DTI called the Small Business Service.  I had always worked in the area of business support.  Government focus changed and the agency was to be consumed back into the DTI and that meant job losses, lots of job losses. From 500 plus to 50.  A voluntary redundancy scheme opened, the terms were okay and rather than be shoved, I volunteered to leave.  It's a long process that lasted 6 months, in this time i had some work to do but i had enough time to retrain.  Since I have a passion for training, I enjoy driving and I really wanted to set up my own business, I decided to re-train to become an Approved Driving Instructor.  This would also give me flexibility in helping my new family including a new born.  They are not so small anymore! 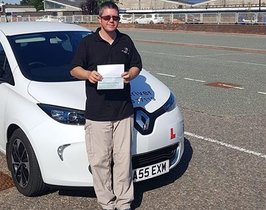 BEFORE SIGNING UP FOR DRIVING INSTRUCTOR TRAINING

Before I took the plunge to start training, I made sure my driving was up to scratch.  I knew that I would need to remember how to steer using the pull-push method.  It had been 13 years since I had passed my driving test 2nd time and I had habits.  So, I worked on the steering and before long I was steering correctly again.

It was difficult trying to find a trainer to help with becoming a driving instructor back then, the market seemed to have just a few trainers and they worked with national driving schools.  I chose the Instructor College, now known as RED.  The first stage was a driving assessment.  That was easy, but I guess they would say I was okay at driving since they were to make a considerable about of money from training me.  It was £3.5k in 2006 plus test fees.  It's a lot of money now, it was even more back then.  But there were no tie ins to Instructor College when I signed up, unlike how it is now.  You really have to watch what you are signing!

There are/were 3 tests to become an instructor

The Driving Instructor College provided training in the classroom to help with part 1.  This training also tied in to parts 2 and 3.

It is and was important to not rely on a trainer to pass the test for me.  The training was delivered well but I had homework to do, lots of homework.  There are 100 questions in the theory test and you can't get many wrong.  The bank of questions had around 1,500 questions in it, so there was a lot of revision and reading.  I booked the part 1 theory test before i signed up with Instructor College.  I gave myself a month and that was adequate.  My test came and I scored a perfect test, 100/100.

I booked in to start my part 2 training.  I needed around 20 hours.  Again, I booked my test in advance as the wait for tests was long.  The training was mostly practical out on the road, learning manoeuvres, driving on motorways and so.  As a driver, I thought I was pretty good already but a weak point was that I relied on my reactions rather than looking further down the road.  The training was sometimes 1 trainer to 2 or 3 in the car.  Whilst this can be daunting, it was good preparation and gave others the chance to critique me and vice versa.  I recall sitting in the back of the car and fearing for my life as one of the trainees was such a poor driver.  Gladly, I didn't see much of them throughout the remainder of the driving instructor training.

Again, it is and was important that I practiced on my own what I had been learning without falling into bad habits.  You cannot expect the trainer to do everything!

So a driving instructor part 2 test is very similar to a learner test.  Except the test lasts an hour, you can be taken on a motorway and you do more manoeuvres and answer more questions.  I passed first time out but I did have one worry.  I was asked to read a number plate at the start of the test and I was struggling.  The distance is a few metres more than a learner.  Luckily, I could read the number plate on the second car that had an old style number plate (the letters are larger!).  I scored 4 driving faults.  A little wide on a reverse around a corner, a mirror fault and not signalling when pulling over, for which I objected (should have kept my mouth shut to be honest!)

The Instructional Ability Test is the hard one.  The Examiner pretended to be your customer and chose 2 driving lessons that I had to deliver.  Each driving lesson is 30 minutes long.  The examiner could pretend to be a new learner, partly trained or a full licence holder.  That is very different to the test now!  The pass rate back then was less than 20%.  I booked the test again without agreement from my trainers and the wait time for this test was 2 months.  I thought I would have time.

The first job was to get my eyes checked.  I had never worn glasses or had any problems so I thought.  Turns out, I had a stigmatism and needed glasses.  They arrived before my part 3 driving instructor training started.  Again, this one had 2 trainees and 1 trainer in the car.  The other trainee with me wasn't engaging, missed lessons and seemed to just disappear.  So the training went to one on one.  The trainer I had was very good, knew everything and I learned a lot.  I had the opportunity to develop my own driving lesson plans, spend time rehearsing my briefing and the way I needed to conduct lessons.  I also practiced with a peer and we practiced fault finding in particular. I didn't take a trainee licence, after all the examiner is not a customer, the test is fake and the examiner has limitations on what faults they can do.  For example, a learner will break the law and speed, an examiner pretending to be a learner wont. Whilst practicing, I helped my wife pass her driving test.  She could already drive an automatic, my job was to eliminate any bad habits and teach the gearbox and clutch.  She passed first time and it was a proud day! Of course, the driving test is different now and I would recommend a trainee licence.

On the day of my final test, I was ready but very nervous.  After introductions with the examiner, I learned what my first lessons were going to be.  Pedestrian crossings/hand signals for a partly trained learner.  I lost a few points as we had driven passed a few crossings before I had briefed the customer (examiner) about them.  Oops.  Next part of the test was to train a full licence holder how to parallel park.  A very simple exercise, the examiner was making faults and I was on it, all except one.  The examiner was using the clutch and brake at the same time.  I was more concerned about the examiner understanding the steering method, so I let it go and would mention it at the end when the steering method was fixed.  Mistake.  Oops!  The examiner told me it was time to head back to the test centre and I lost my chance to mention it.  Or had I?  On arrival back to the test centre I started a debrief.  I mentioned the foot fault but was that enough?  The examiner went off to their office and 20 agonising minutes later they returned with the verdict.  I had passed - just!  He explained that had I not mentioned the foot fault, I would have failed.  It was that close!  4 out of 6 was my score, just. I did explain my reasons and they seemed happy with that.

So it took me 6 months to pass all 3 tests and I was still employed as a Civil Servant.  I would never recommend putting all your eggs into one basket.  2 months later, I was redundant and starting my career as a Driving Instructor.  I am now a Grade A instructor, with many years of driving lessons behind me.  The Part 3 test has also changed a lot, since I did it.

IF YOU LIKE WHAT YOU ARE READING AND YOU ARE INTERESTED IN BECOMING A DRIVING INSTRUCTOR IN SHEFFIELD AND THE SURROUNDING AREAS, CALL ME OR CLICK HERE